In this tutorial, I’ll cover how to analyze repeated-measures designs using 1) multilevel modeling using the lme package and 2) using Wilcox’s Robust Statistics package (see Wilcox, 2012). In a repeated-measures design, each participant provides data at multiple time points. Due to this, the assumptions about model error are different for variances which are presented between subjects (i.e., SSB than are variables presented within subjects (i.e., SSW. After the within-subject variability is partialled out, we model separately the effect of the experiment (i.e., SSE and the error not account for by the experiment (i.e., SSR).

When using this tutorial, there are a few things to keep in mind:

The first dataset we’ll be using can be obtained from the Personality Project:

The main research question is does the valence of the word affect the rate at which items are recalled? First, let’s take a look at descriptive statistics of the dataset. We can sort them by the item valence using the describeBy() function in the psych package, which is available on CRAN.

We can generate a quick boxplot to display the effect of Valence on Recall using the ggplot2 pacakge from CRAN. 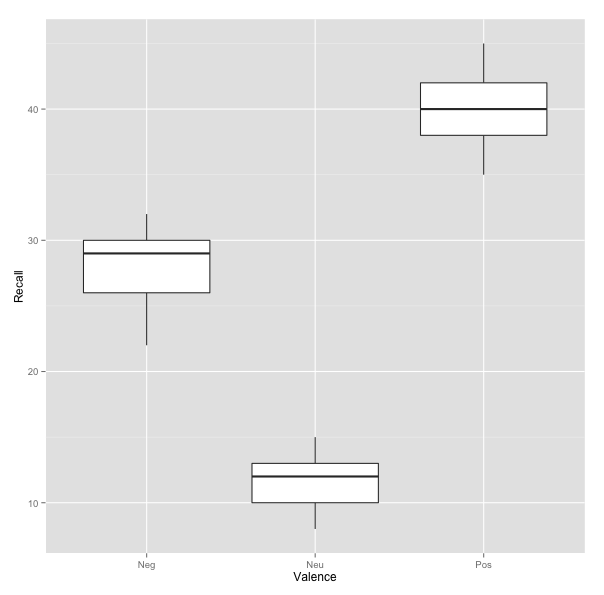 A multilevel model is simply a regression that allows for the errors to be dependent on eachother (as our conditions of Valence were repeated within each participant). To run this type of analysis, we’ll use the nlme package from CRAN, although I’ve also had good luck with the lme4 package if you like experimenting.

Similar to any approach to model testing, we want to see if our predictive, augmented model is better than a simple, 1 parameter mean model. Thus, we begin by specifying a baseline model in which the DV, Recall, is predicted by its overall mean. Second, we specify our model of interest, in which Recall is predicted instead by a the item Valence, which was repeated within subjects.

One way of assessing the significance of our model is by comparing it from the baseline model. By comparing the models, we ask whether Valence as a predictor is significantly better than the simple mean model (i.e., a better fit). We can do this with the anova() function.

The output contains a few indicators of model fit. Generally with AIC (i.e., Akaike information criterion) and BIC (i.e., Bayesian information criterion), the lower the number the better the model, as it implies either a more parsimonious model, a better fit, or both. The likelihood ratio indicates that our valenceModel is a significnatly better fit for the data than our baseline model (p < 0.0001). Therefore, the item Valence had a significant impact on the measured Recall of the participant, Χ2(2) = 44.87, p < 0.0001.

We can obtain more specific details about the model using the summary() function:

As of 5/1/13, the WRS package must be compiled from source to be installed. You can obtain the source package from the R-Forge repo below:

Unlike using lme() to analyze the data as a multilevel model, rmanova() requires that the data are in wide format. To adjust our table, we’ll use the reshape2 package from CRAN and cast the data into a wide format.

For some reason, the rmanova() function doesn’t like dealing with factors variables, so we’ll remove the 5 Subjects. Finally, we’ll use rmanova(), which trims the data by 20% before estimating the effect.

The second dataset we’ll be using can be obtained from the Personality Project: 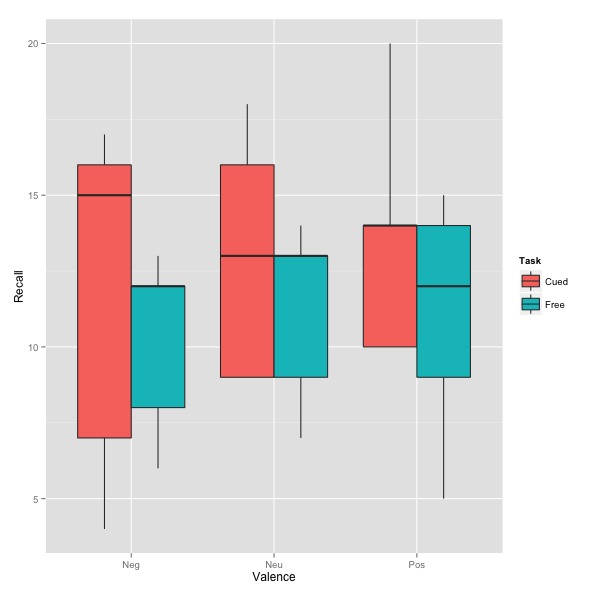 We again the significance of our models by comparing them from the baseline model. We can do this with the anova() function.